Northeast 42nd Avenue is becoming a corridor for food and drink in the Concordia and Cully neighborhoods.

Oakshire Brewing is opening Oakshire Beer Hall, featuring a wide range of beverages, including as many as two dozen beers from its original Eugene location.

The beer hall is in the former location of Old Salt Marketplace at 5027 N.E. 42nd Avenue.

It will expand outside the original Old Salt to create a patio area for seating and food carts. There will be no pool table and just one television in the back room.

The kitchen will turn out fresh, savory and spicy Chamorro cuisine under the sure hand of Ed Sablan of Biba, founder of the PDX671 food cart.

Chamorro people are from the Mariana Islands. They took their delicious food to Guam, where it incorporated flavors from the Philippines, China, Japan and the Americas.

“People will increase their visits to taprooms and brewpubs, and will favor those providing the best combination of service, environment and high quality fresh beer,” said Jeff Althouse, Oakshire Brewing founder and CEO.

The beer hall will eventually have rotating food carts on the outdoor patio, in addition to the kitchen providing offerings directly to guests. The restaurateurs operating at Oakshire will use real plates, bowls and silverware, avoiding wasteful single-use service items. 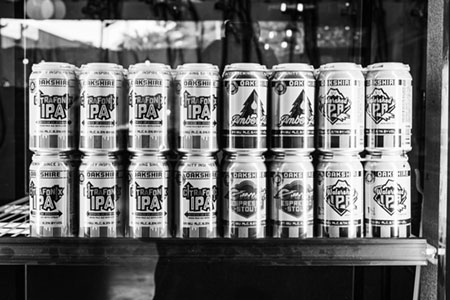 The location also features a 500-square-foot space for pop-ups, seated private events, Oakshire beer dinners and tastings. The space will also be available to the food cart and kitchen operators to host their own dinners.

Oakshire plans to collaborate with the food cart partners for the beer dinners.

“The kitchen is really a work of art,” Hannah added. “It features a well-appointed back line that will be used to service the event space and serve as a commissary kitchen for the food carts.”

Dan Russo is Oakshire Brewing operations director. “In 2018 our brewing team released a dizzying number of beers under our Pilot and Vintage programs,” he said. “That’s 38 new beers in total, and nearly all out of our Public House in Eugene.

“Our Portland beer hall will pour draft wine, cider and kombucha, just as it does in Eugene.