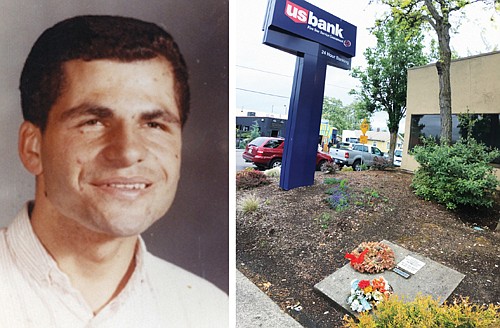 Note: The February 2022 CNews column about Eddie “The Weatherman” Morgan awakened memories of many members of the Concordia and Cully neighborhoods. A few of them offered the details below.

“Eddie brought our neighborhood together, both in life and in death,” wrote Susan Nelson, Cully neighborhood historian. “A candlelight vigil was organized spontaneously for Eddie by the owner of the local Sentry Market. It was attended by hundreds, including Portland police chief Charles Moose and mayor Vera Katz.”

Although Eddie was not Catholic, St. Charles Catholic Church held a service for him. “At his graveside, residents lined up to toss handfuls of dirt into his grave,” Susan recalled.

According to Sharla Fischer, Wilshire Tavern owner, her customers donated the funds for Eddie’s plaque at the spot where he died on 42nd Avenue in front of the U.S. Bank. “Bill Taylor, who has passed away, John Lamphere and Steve Newstrum received permission from the bank and placed the plaque just a few days after Eddie’s death,” she wrote.

Ginger O’Harrow, 93-year-old widow of Bob O’Harrow, reported, “Papa … took it upon himself to tend to the stone. He was also the one for years and years and years to place a Christmas tree. That’s what papa started.”

When Bob died in 2019, Mike – one of the O’Harrows’ seven children – took over the responsibility. “Mike probably helped Bob the last couple of years he was alive,” Ginger added.

“It was his father’s passion,” Mike’s wife Karyn O’Harrow explained. “’I will honor Eddie as you did,’” Karyn remembered her husband told his father before Bob died. “’I’m doing it for my dad. More importantly, I’m doing it for the respect for Eddie,’” she quoted Mike.

Of the O’Harrow children, Mike lives closest to Ginger in Cully neighborhood and to the plaque at the U.S. Bank. Ginger believes that’s not the only reason Mike continues the tradition “That’s Mike,” she said. “That’s just him.

“Eddie was just special to us, not just my husband but everybody in northeast Portland.” His daily walks on 42nd Avenue took Eddie from Lombard Street to Sandy Boulevard, according to Ginger. When cars full of children would pass him along 42nd Avenue, car windows would be rolled down and children would hail him. “Eddie would wave back,” Ginger pointed out.

St. Charles Church was one of his daily stops. Ginger said Eddie would attempt making the sign of the cross to the priest to show respect. “He stopped at the tavern every day, but he never took a drink.”

Ginger believes Eddie’s walks were interrupted only to greet people and tend a few odd jobs. “He had nothing else to do,” Ginger said. “That’s just what he did.”

Susan added, “This neighborhood won’t allow the memory of Eddie to be forgotten.”

Portland blogger and TriMet operator Dan Christiansen posted his tribute, below, in his 2009 “In Memory of ‘’Eddie The Weatherman.”

“I think every neighborhood has one. Someone who is special, in my days they would call ‘retardos’ or ‘brainers.’ I cringe now at the language but, at the time, there was no love for the different. So these special people could function in the world on a basic level. They were not Rainman, could accomplish super feats of math. But, on the flip side, they could live a good life. Even a valued life.

“In the neighborhood I grew up in Portland, that was Eddie the Weatherman. Now, he did not have the name ‘Weatherman’ when I grew up. We called him ‘Eddie the Walker.’ He would walk up and down 42nd Avenue and all over Killingsworth Street. You could not live there in the late ‘70s and early ‘80s and not have seen him. He was not ‘The Walker.’ That was an older man with a Labrador he would walk with almost four hours every day. Eddie was close. He was ‘Eddie the Walker.’

“As I grew up and went to high school, Eddie had already begun his fixation with the weather. He was always walking around smiling, telling people the weather that was on the way. I can remember going up to the local Catholic church, where I was the part-time janitor (job lasted a month), and he was always there to tell me the weather.

“He was known in every business along 42nd, where he would boldly come in and tell you the weather. If you watched him, he would just walk up the street, going in and out of shops, talking about the weather and meeting everyone with a smile. He always walked with a determined stride like he was on a mission. And, in a sense, he was.

“Now this was in a day before cable and 24-hour weather reports were on every TV and radio station. Eddie was our weatherman. He would wake up early and call the weathermen on TV to get the report for the day. All the weathermen in town knew him and they were always there to help him out. I had no idea about this until later, but they all knew and loved Eddie as much as we did.

“We had many strange, unusual and special people where I grew up. It was a mixed neighborhood racially and economically as well. It ranged from the Finnish woman who was always yelling at the top of her lungs about people spying on her to the man who kept a horde of cats in his house. We had our share. Of all these many unique characters, Eddie was the most innocent and simple. I say ‘simple’ in a good way here, not a derogatory one.

“When I moved back into that neighborhood with my then-wife years later, Eddie was there walking along. He was one of the first people I would see in the morning on my way to work. He loved the Thriftway, where he was known by name by everyone. When I moved back, he looked a bit older but still walked the same way, on the same mission. For him, nothing had changed.

“A year later (Karin made sure we lived in no place longer than a year), I moved out of the old neighborhood. It was then that it happened. You see, by the mid- to late-‘80s, things had started to change where I grew up. Crime was on the rise. Gangs and issues with gangs were also becoming a problem.

“One night while walking down 42nd, a car pulled up and someone inside shot Eddie for no reason. He died right on the spot, and with him died a bit of my neighborhood. No one ever found out why or who. It was impossible for Eddie to really start something, so one can only imagine that it was just a random killing – maybe an initiation for some lost soul trying to fit in with a group that put no value on human life.

“The northeast neighborhood was devastated. Here was a guy who, by any economic measure, was disadvantaged but who, in a real way touched the hearts of everyone on 42nd. The local U.S. Bank put up a memorial right where he fell. Everyone showed up. I even drove back to that area to be at the vigil. I cried along with everyone else.

“So the other day on, extra service I had a call to go fill a run on the bus route 75. It goes right down 42nd – my old neighborhood, my old world. The bus I was covering for had been held up at Hollywood Transit Center, and I was the closest extra service bus. So I swung in to the rescue. (Extra service is like the lone ranger of the TriMet transit system.)

“I pulled up to Alberta and 42nd to let a passenger off. It was dark and there was a light sprinkle. I opened the door and, before I could shut it, I saw the memorial for Eddie. I secured the bus and got out of my seat, much to the shock of everyone on the bus.

“I had forgotten all about Eddie and I stood there, sad for the memory and guilty for having forgotten. It’s just a small flat marker there along the sidewalk. I looked left and right and wondered if anyone living there knew the name Eddie Morgan or ‘Eddie the Weatherman.’

“Most of the people there have moved away or died. Probably it was just a place people flicked their butts while waiting for the bus; a name on a marker and how could it matter to them? They can never know.

“There was an ancient belief that if people remembered you and spoke your name, you lived on in the afterlife. I said his name. I promised not to forget his name and to say it every now and then to remind myself of where I came from and how fragile our hold on life really is. I strive, myself, to live a life equal to this simple giant of 42nd Avenue. I won’t forget ‘Eddie the Weatherman.’

“I have a personal saying now ‘Live life in a way that a thousand people weep at your passing.’ Though it sounds grim, I believe it is a good yardstick, one that Eddie lived up to. One I will strive to live up to.”