“Say Their Names,” isn’t just a mantra for one neighbor, nor is it enough.

“I wanted to know more about these people who are in the headlines,” explained Rob van Nood.

“I started doing more research and started realizing, for me, the power of actually knowing a person’s story is a much more emotional connection.”

Between late June and mid-August, he had created and installed 24 memorials on poles bordering Fernhill Park near his Cully home. Each one shows the face and the name of a Black person who died at the hands of police or vigilante citizens.

Additionally, the memorials display quick response (QR) codes to sites that tell the victims’ stories and electronic votive candles on a timer that lights them for five hours beginning at 8 p.m.

“It gives us an emotional connection to the humanity of each person. I’m still going,” Rob said. “I’ll keep making them with the time and energy I have.”

Once installed, Rob checks on each memorial and provides maintenance as needed twice a week. “This gives me an opportunity to remember to say each name several times a week, and think about their personal stories.

“I’ve always been interested in the idea of public art, basically unauthorized public art,” he explained. He’s an educator, and art is his lifelong passion. 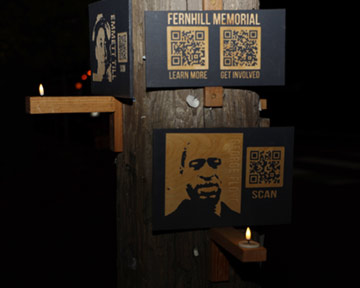 “I wanted to do this for my neighborhood as a gesture of remembrance that might stay in people’s minds beyond the headlines,” he added.

His website explains his rationale: “Who we choose to memorialize in public spaces says a lot about who we are as a people. At a time when the memorialization of historical figures is being questioned across the country, it is every person’s right to consider who should be represented in our neighborhoods and cities. 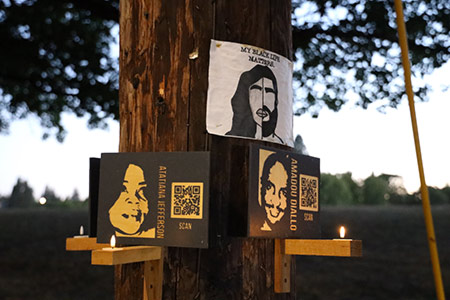 “This work is a reminder and a call that it is time that this country raise up the images and stories of people who have lived under the oppression of systematic racism for over 500 years.”

Rob added, “As a white man, I’m struggling with whether I am the right person to be choosing the names.” The first dozen victims he memorialized came from a list of names and websites distributed in May by his school’s inclusion and outreach director.

The next 14 came from headlines and three from the mid-20th century. Rob’s social media invites more recommendations.

In fact, that social media has gone viral since neighbors and other visitors to Fernhill Park share them from bit.ly/FHMemorial, @FernhillMemorial and #FernhillMemorial.