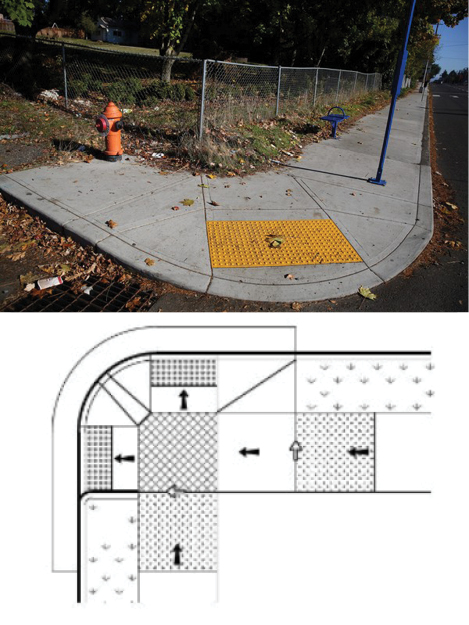 The largest project in Concordia funded by the 2016 Fixing Our Streets gas tax is scheduled to break ground this summer, as Alberta Street is repaved from 15th to 33rd avenues.

The project will take place a few blocks at a time, with the street periodically closed as needed to facilitate this. In addition to repaving, the project involves the rebuilding of many of the sidewalk ramps to bring them into compliance with the Americans with Disabilities Act (ADA).

The city settled a lawsuit in 2018 with the Civil Rights Education and Enforcement Center. It requires the city’s pedestrian network to be brought into ADA compliance within 12 years of that date.

Approximately $10 million of work each year is needed to meet this goal.

One of the common improvements coming to Alberta Street is the replacement of a single diagonal ramp pointed into the center of the intersection from the sidewalk at the corner, with two ramps, one each facing the sidewalk on the other side of a single street.

All corners on Alberta Street were surveyed, resulting in a list of upgrades that also includes decreasing the grade of slopes, adding flat surfaces for landing areas and adding yellow bumpy pads where missing.

When asked if the project is expected to lead to increased speeding on Alberta Street, the response from the Portland Bureau of Transportation (PBOT) was that recent traffic counts from last July showed an “85th percentile speed of 24 mph.”

This means 85% of drivers were traveling at or below 24 mph. The only planned response is to measure speeds again after repaving. PBOT is not planning to install speed table crosswalks on Alberta Street – such as those found on 41st and 42nd avenues between Fremont and Knott streets – or install any other physical measures to slow traffic.

PBOT reported its plan is simply, “If speeds increase after paving, we can take new speed counts to see what the speed differential is before and after the paving work.”

Finally, the Portland Bicycle Plan for 2030 and the Portland’s Transportation System Plan both call for a separated, in-street facility on this exact stretch of Alberta Street, classified as a bikeway.

Without consulting with the community, PBOT staff made the decision, however, to ignore these classifications and instead simply repave the existing street cross section. For better or for worse, PBOT currently plans to finish the repaving of Alberta Street by the end of the year.

Garlynn Woodsong lives on 29th Avenue, serves on the CNA board and is an avid bicyclist. He also is a dad who is passionate about the city his son will inherit. He is the planning + development partner with Cascadia Partners LLC, a local urban planning firm. Contact him at LandUse@ ConcordiaPDX.org.