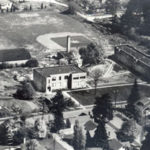 Responding to a need for teachers and ministers in the Pacific Northwest, Concordia University-Portland (CU) was founded in 1905 as a high school. It opened with $800 and 16 students in the basement of Trinity Lutheran Congregation.

By 1907 the Northwest District of the Lutheran Church Missouri-Synod purchased land and constructed a school building at the current site, 2811 N.E. Holman St.

Under the direction of its first president, F.W.J. Sylwester, the school overcame obstacles to survival. At the time, unpaved roads proved a challenge and the Great Depression significantly reduced student enrollment and employee compensation.

In 1954 it opened its doors to women to prepare teachers for parochial schools and partnered with Emanuel Hospital to prepare nurses. In 1958 president E.P. Weber spun off the high school program as Concordia High School under the direction of Art Wahlers, Ph.D., who also helped found the Concordia Neighborhood Association.

When Charles “Chuck” Schlimpert, Ph.D., was named the fourth president in 1983, Concordia College was firmly rooted in what had become known as the Concordia neighborhood.

He served as president for 35 years during unprecedented growth for CU. Four colleges were distinguished, and the university grew from 800 students to more than 6,000 nationwide.

In 1995, the Concordia University System was formed and linked 10 Concordias across the U.S. At the same time, CU reaffirmed and updated its mission and vision to prepare leaders for the transformation of society.

In 2010 Washington Monthly ranked CU No. 1 nationally for student participation in community service among U.S. universities with masters programs.

In collaboration with neighbors, the city, and the broader community, campus expansion continued.

In 2009, CU opened the George R. White Library and Learning Center, which serves the Concordia neighborhood as a local community library, hosts arts and culture events, and includes the Jody Thurston Northwest Center for Children’s Literature.

CU continues as a nonprofit, private Lutheran university preparing leaders for the transformation of society, serving the community, and providing a diverse student body with undergraduate, graduate and doctoral programs on campus and online.