You are sure you hear Frank Sinatra croon “My Way” as you enter furniture store A Life Designed (ALD).

Owner and curator Randy Sloan created ALD 4.5 years ago while living in Scottsdale, Arizona. His style leans toward “sophisticated man cave,” Randy explained. “Martinis, the Rat Pack, low lighting, leather.”
But, when he makes purchases for ALD, Randy does not speculate. He buys only what he loves, what speaks to him. And, as this is the case, many clients find more than one piece to purchase. They all work together.

While Randy was living in Scottsdale, he moved five times within three years. Each time he needed to downsize, and each time he sold his excess items on Craigslist.

During one of those downsizings a husband and wife contacted him. They were buying furniture for their son in Soho. They were scavenging Craigslist for pieces. They were astonished by all that Randy was selling.

“Your taste is exactly what our son loves,” he was told. “Are you an interior designer? You should be.” The couple asked what he would charge for everything: couches, art work, everything. They cleaned him out, packed everything in their trailer and headed off to New York.

ALD started as an online business in 2013 – ALDPDX.com – which thrives to this day. Randy buys a lot from Los Angeles estate sales and people moving. 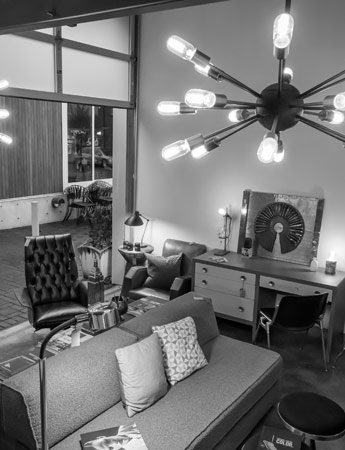 He has clients in Toronto, Scottsdale and even Tokyo. Shipping alone cost a Tokyo client twice what he paid for a 1950s midcentury modern desk.

Scottsdale was getting expensive and Randy had no real storefront. Coming to Portland, Randy looked in the Pearl, but it would have limited him. “There was no storefront. I would have been selling out of my apartment just like in Scottsdale,” he said.

Randy got on Craigslist. A space had just become available in the Alberta Arts District. He moved in at the tail end of August and opened ALD in September. It’s at 4966 N.E. 14th Ave. Current hours are Mondays – Fridays 11 a.m. – 5 p.m., and evenings and weekends by appointment by calling 360.359.8458.

Now that Randy has his own shop, he has the freedom to add vendors. The inaugural vendor is a candle maker out of Brooklyn, Urban Sundry. The candles emit scents that are unmistakably masculine.

Randy plans to set up gallery showings. He would not take commissions for any of the pieces sold. He would be doing it primarily to share community.

Tamara is Edit Kitten, a writer with 20-plus years of experience offering a softer, gentler approach to editing and coaching. Her personal editors – Armani, Max Factor and Spicey’D – are also her cats. Visit her at EditKitten.com or contact her at Tamara@editkitten.com.