This is the first of a three-part series about the early days of the Alberta business district, written by Northeast Portland neighborhood historian Doug Decker. To read more of Doug’s research and writing—or to read the full text of the early news stories mentioned here—visit his blog: www.alamedahistory.org

We’ve come across a fascinating property in the Alberta Arts District, formally known as the Elberta Addition (that’s not a typo, that’s an actual plat name). It’s a bungalow grocery store and home we’ve researched on the northwest corner of NE 27th Avenue and Going Street. Built by Irish immigrants and operated for several generations, the building eventually ran out of retail energy in the 1960s when it became a church and then an artist’s studio before nearly collapsing from years of deferred maintenance and decline. We’re eager to share the fascinating story of this sweet little building—which has been lovingly restored—and in Part 2 in the next edition of Concordia News, an incredible photograph from the pinnacle of the store’s retail life.

But first, we have to provide some context about the area that today might like to be known more for its hipness than the complex currents of change underway, though both are present in ample quantities.

To be clear, the geography of the area in mind actually holds three of today’s neighborhood associations: King, Vernon and Concordia, and the business district known as Alberta Arts (which technically resides mostly within the Concordia neighborhood: think MLK to NE 33rd and Alberta to Killingsworth). But back in 1909, this area was a muddy, brushy flat that existed outside the city limits and beyond what Portlanders thought of as their city.

If you lived up here in 1909, you were probably either a dairyman or the advance guard of development, and you could see the city creeping your direction. After the Lewis and Clark Exposition, Portland was booming with new residents and new construction, and hungry for relatively close-in developable land.

Change at the turn-of-the century

Here’s a hopeful word picture from H.D. Wagnon, secretary of the Alberta Improvement Association, about how much change took place at the turn of the century.

“From five to seven years ago a man on horseback had to make a wide detour through fir and hazel thickets to pass through what is known as the Alberta district in the northeastern section of Portland, but it is now a great residence and business district and a center, with nearly 40 stores and 10,000 people. In the old days the few people in the Alberta district waded through mud and threaded thickets to their modest homes built on lots that were selling from $20 to $40 each.

“One handicap for the district is that part of Alberta street was laid out too narrow, but proceedings have been started in the City Council for the widening of the street, and all new buildings have been set back to conform to the new line. The street railroad company has promised that when the street has been widened it will lay a double track and make further improvements over the present schedule of 21 minutes to the west side.”
-From The Oregonian, January 9, 1910

If you opened up the real estate section from any Sunday edition of The Oregonian during these early days you’d find a flurry of advertisements for Alberta’s desirable lots. The new streetcar provided access, the lots were affordable compared to other new subdivisions elsewhere in town, money was relatively available to loan during the rising economy of 1910, and people were flocking to the area. 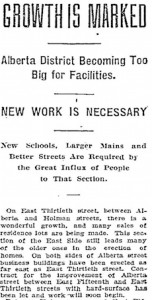 Of course, this caused its own problems, documented a few months later in the June 26, 1910 edition of The Oregonian:

And by the end of 1910, Alberta was becoming so populated, that neighbors were demanding the city build a school. The problem of education infrastructure lagging behind neighborhood development was a trend across the eastside, which was successfully raised and driven by active and engaged parents (particularly moms). One might think this equation would be clear enough for neighborhood developers (homes + kids = need for schools), but their focus was on business and the sales of lots represented profit while the construction of school buildings represented only cost. During those early years, Secretary Wagnon, a promoter through-and-through, preferred to focus on the immediate positives:

“One cannot get beyond the sound of the hammer or the sight of piles of lumber in this district.”

We like that sound-picture and can absolutely imagine what it must have been like on a weekday morning, closing your eyes anywhere along Alberta and hearing hammering and construction in every direction. That little detail tells its own story. 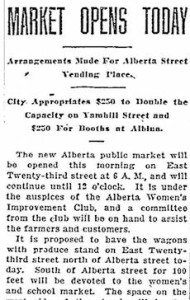 Against this backdrop of growth and growing pains, local residents started some new traditions with unintentional echoes in the life of the district today. Market fairs for produce and hand-made products were springing up mostly as a matter of necessity for local residents.

The open-air markets were a temporary fixture, but steady retail was shoring up its presence in the district. That’s where our bungalow grocery story will begin in Part 2: construction of a store connected to a house at the northwest corner of NE 27th and Going, right in the heart of the construction boom.

Next up: In Part 2, 105 years ago, an older Irish couple moves to the neighborhood and opens a men’s clothing shop, which quickly becomes a neighborhood grocery.