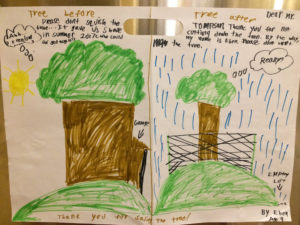 They painstakingly added details including leaves, squirrels, birds and acorns; drew pictures of themselves standing next to the tree and riding bikes around it; and wrote personal notes to the developer who has purchased the property and plans to build a single-family dwelling on it. 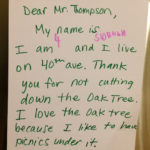 “Thank you for not cutting down the tree,” wrote 7-year-old Roxy, who lives on the block. “I love the oak tree because you can ride your bike around it and you don’t have to go too far.”

When the property was sold last summer to Eric Thompson of Oregon Homeworks LLC, community residents were deeply concerned the oak tree – which has a trunk diameter of 49 inches – would be cut down. Last November, after a few visits to the planning department to do some research, I called the developer. He told me he intended to preserve the tree.

He has since filed his initial site plan with the Portland Bureau of Development Services, which shows the tree intact on the lot, with a fence encircling it 25 feet from the trunk to protect it during construction.

For the past decade, the former property owners have hosted annual Labor Day potluck barbecues under the oak’s sprawling canopy. Across the years, residents also enjoyed impromptu gatherings and celebrations on other holidays, such as Independence Day and New Year’s Eve.

Residents describe it as “iconic,” the “focus of the block,” an “eye catching wonder” and “a gathering place for our community.”

“The oak has played a really important role in our community,” said Carol Apple, who has lived on the block for 42 years. “It’s a place where kids love to play.

“After they grow up and move away, they come back the oak tree is still there,” she added. It creates a sense of continuity. We’re a close-knit community, and having a focal point on the block where people gather helps build strong relationships.”

Dalla Francis met her husband, Jim, under the oak tree at one of those Labor Day barbecues, and they still come back to visit it.

“I don’t know if we ever would have met if it weren’t for that tree and those picnics,” she said “The tree has a lot of good memories for us.”

Prior to selling the property, the former property owner and another neighbor, Cindy Black, nominated the tree for Heritage Tree status, which would have given the tree a high level of protection in development situations like the one that’s happening now.

The committee that evaluates the nominated trees voted five to four in favor.

“Since that is not considered a ‘substantial majority,’ a second vote was taken and was unanimous for Tree of Merit,” reported the committee’s field notes, which were obtained through a public records request from the city.

While Tree of Merit status affords no protection for the red oak tree, the tree appears to be safe from the chainsaws for now.

Unfortunately, that cannot be said for many other large, beautiful trees that are equally important to communities throughout the city.

Title 11 is the section of development code governing how the city manages trees. It includes special protections for large trees with trunk diameters greater than 36 inches.

But there are loopholes in Title 11 that allow developers and property owners to skirt those protections and cut down even very large trees like the red oak.

I’m in the process of doing the research to better understand how the tree code was developed and the compromises that were made to honor the different needs in our rapidly growing city. My goal is to find a way to balance those needs and still protect large, valuable trees like this oak.

Melissa lives near the red oak and has nine trees on her property. She has always loved trees, but gained a deeper understanding of their value to the planet and people while covering the story for several publications about Ascending the Giants. That two-year project had Portland arborists climbing and measuring the world’s champion trees. She climbed some of the world’s largest trees, many of them in the Pacific Northwest.