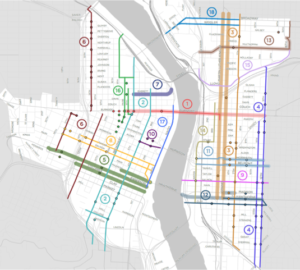 A new multi-modal transportation plan for downtown Portland, called the Central City In Motion Implementation Plan, was passed by City Council on November 15, 2018 by a vote of 3-0 (and Willamette Week reports that both Mayor Wheeler and Commissioner Fish would have voted yes on the plan, had they been present).

The plan includes 18 projects that are intended to increase the people-moving capacity of the central city’s transportation network, so that it will be able to accommodate the additional 40,000 households and 50,000 jobs that are expected to locate there between now and 2035.

Creating a complete, connected bicycle network is thus the most efficient way to allow the most additional people to move through the central city. It is no surprise, then, that all 18 projects include bicycle elements, as elements of street design that increase the number of people that a street can accommodate (throughput):

6. NW / SW 12th / 14th / 17th. A protected bike lane on NW 14th from Burnside to Hoyt, and a wide bike lane from Hoyt to Savier; a two-way bikeway on SW 17th from Salmon to Alder, and a neighborhood greenway from Madison to I-405; and a protected bikeway on SW 12th from College to Stark, will increase throughput 18%.

7. NW Everett St to Steel Bridge. A BAT lane on Everett as it approaches the Steel Bridge, and a new Transit Priority Signal at the top of the ramp east of NW 1st Ave, will increase throughput by 68%.

9. SE Salmon. Extend the greenway from SE 12th to the Eastbank Esplanade.

14. SE Water / Stark / 3rd. A two-way bikeway on Water Ave will provide a safe and convenient alternative to the often heavily used Eastbank Esplanade to access bridges and nearby destinations, increasing throughput 81%.

15. NW Lloyd Blvd. A two-way bikeway will provide a cycling connection from the Steel Bridge to NE 16th, increasing throughput 39%.

17. SW Naito. Implementing a year-round version of “Better Naito”, and adding smart signals to smooth auto access to I-5 at the Morrison Bridge, will increase throughput 94%.

These 18 projects have been prioritized, with the most critical investments recommended for implementation over the next 5 years.

Funding for the projects comes from a variety of sources. $35 million is needed to build the first phase projects; of this, PBOT has $8.3 million secured from federal grants and local gas tax proceeds; $16.7 million pledged from TriMet; and $11 million from System Development Charges. There’s a gap of $10 million yet to fill; but the current gas tax sunsets in 2020, so it’s likely that more projects could be funded if it is extended beyond that date. This outcome is not guaranteed, however, so we will need to watch and use the first phase, then support PBOT in their quest for further funds if the first generation of projects proves a success.