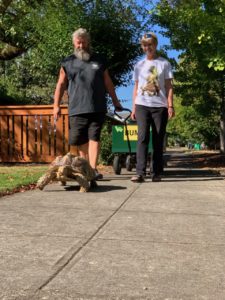 When Rita and Ross Davis first met Bump, Bump was sick, blowing bubbles out of his nose, and laying all by himself in a wet and cold backyard. He was a tortoise in need of a rescue.

Bump only weighed 3.5 lbs and the veterinarian said he was still a baby. Rita had the option of giving Bump a shot every day or getting him to take his medicine by mouth.

That was nine years ago and he has been healthy ever since.

Bump is an African Spurred Tortoise and could live to be over 100 years, which means Rita will be putting him into her will for one of her four granddaughters.

Bump lives in the Davis house and has his own bedroom though he loves to sleep under Ross’s lazy boy chair (which he can move by pushing it) and next to the night stand on Rita’s side of the bed.

Because Bump does not drink water, once a week he is treated to a spa day and is soaked in the bath tub. This helps him absorb water. He will splash water onto his back by flipping his front legs towards his back.

Bump’s favorite foods are lettuce, green beans, raspberries, apples, watermelon as well as his tortoise kibble. “When we first got Bump, he tried eating a lot of things he should not (like cigarette butts & paper). I started working on training him to NOT eat things that could hurt him. Surprisingly I was successful!” Rita said.

Bump has always likes a challenge. It started by climbing up & down curbs & drive ways. He also loves to move furniture. They have a chair in the kitchen that he gets under, and drags it across the room and into the hallway by his bedroom.

A year ago during a big back yard party, Bump went under the table full of food and was able to drag it around until Rita caught him. When she moved him, he came right back and did it again.

Rita started walking him when he was very young so, if he ever got out of the backyard, their neighbors would know where he belongs.

“It’s amazing to see drivers when they see Bump walking down the street. Some get distracted and drive into the curb. Others will drive around the block to make sure of what they thought they saw,” Rita admitted.

The little family goes for walks at least once a week. These walks take about two hours, but Bump can often walk about a mile in that time if it is warm enough. They only let him outside when it is over 70 degrees.

On walks they have to watch their time because, after two hours, Bump will get as stubborn as a toddler. They will try to go one way (towards home) but he wants to go the other way. His first vet suggested that Rita always have a wagon with her so, if Bump gets tired or stubborn, he can take a Tortoise Time Out in the wagon and they can head home.

Ross had to build a ramp so that Bump can walk up or down the few stairs to get outside or back into the house. At 60 pounds, Bump is too heavy to pick up.

Bump loves the attention he gets from everyone. While he will not stop and pose for pictures, he is real good when people want to touch him. Dogs seem to like him as well, even though they are not sure what he is. The dogs and kids will circle around him, but he keeps moving. One dog even brought him a stick to play with but Bump just kept moving. Some dog owners say that their dogs look for Bump when they go to the Fernhill dog park.

If the kids are playing sports or track, he wants to go get in the center of it all. A year ago during a big back yard party, Bump went under the table full of food and was able to drag it around (until Rita and Ross caught him). When they moved him, he would come back and do it again.

Bump even got an invitation from a neighbor girl to attend her kindergarten graduation party. She drew a card, dropped it into the Davis mail slot, and stopped by several times (with her mother) to make sure Bump was coming to her party. He was an honored guest.

A few years ago when the Naked Bike Ride started at Fernhill Park, Bump was in attendance.

Many riders wanted their picture taken with him. Ross said he had never taken so many pictures of naked people in his life. When the parade started to move out of the park, Bump was determined to go with them. He made it to the corner of 42nd & Killingsworth and just crashed.

He crawled to a bush and passed out.
Luckily, they had their wagon.